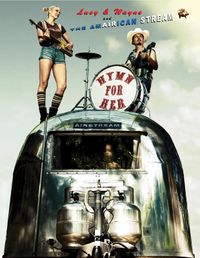 Bringing their wild-eyed mash-up of country, blues, punk, Americana and good ‘ol psychedelic rock and roll, Hymn For Her is burning down the highway and heading back to Sturgeon Bay once again, this time to perform at The Tambourine Lounge on Tuesday October 2nd at 7pm.

Sight unseen you’d be hard-pressed to believe that they aren’t a full 4-5 piece band as Wayne (with the devilish voice), simultaneously plays the kick-drum, high-hat, acoustic guitar and harp while Lucy (of the fallen-angel voice) delivers a gritty squall on her “Lowebow” — a custom-made cigar-box guitar also known as “The Riff Monster.”

Touring tirelessly throughout the US and Europe for years on end, the two have managed to accomplish a lot while constantly being on the move, one of their latest achievements having completed a new album recorded with Grammy winner Vance Powell to be released in September of this year.

These two never seem to run out of fuel both on stage and off. They have an amazing ability to muster up the spirits of Captain Beefheart, Primus, X, R.L. Burnside, JS Blues Explosion and the Ramones all at once in a show that is powerful, delightful and just an all out great rockin’ time.

Advance reservations strongly recommended as we do have a max. capacity. Walk-ups only if space permits.

Tickets are non-refundable and non-transferable to other shows.